Choosing the Best Oil for Your Mazda Rx8

Not all oils are created equal.  So what are we looking for in a good Engine Oil for our Mazda Rx8?

As an expert Mazda Rx8 engine builder,I am in the unique position to be able see and assess the consequences of all things relating to engine reliability and longevity.  One of the areas not very well understood is Engine Oil & Lubrication.

Here are few case studies I have seen recently, with commentary illustrating why this subject is worthy attention. 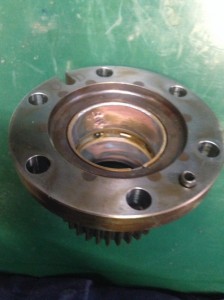 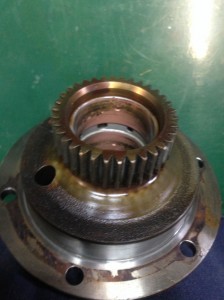 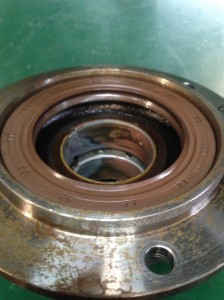 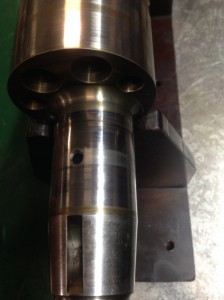 Scott’s engine had only completed 83,019kms.  Although still running, you can see the engine on the verge of catastropic failure.  The bearings were all failing due to a combination of not enough and a poor quality oil.  The crankshaft shows damage due to the lack of quality lubrication.  This engine is likely to have been running oil levels too low too often with dirty old oil.  Good quality oil will stay a good lubricant for longer.  Consistently maintained higher engine oil levels also helps dilute contaminants until they are removed by the oil filter.

Brett’s engine completed 140,313kms, shows significant bearing wear due to poor oil quality & low oil pressure.  Although not the ultimate cause of engine failure, it would not have been long before crankshaft damage would have occured.
The ultimate cause of failure with this engine was excess carbon jammed into seals.  As well as excess carbon, the engine had low compression from worn compression seals, poor starting, power and reliability.

Three examples;
Tom’s engine 189,794kms, Brett’s engine 140,313kms, and Scott’s engine 83,019kms.  These examples show its not kilometres travelled that cause the majority of bearing wear.   Tom’s engine had done 2.5 times as many kilometres as Scott’s yet the bearings are worn far less.  We can see that longevity is achievable with factory Mazda bearings.  I suggest that the difference in oil quality and maintenance standards between Scott and Tom’s engine created the wide variation of bearing condition.

Maintaining clean inside of engine and internal oil galleries. 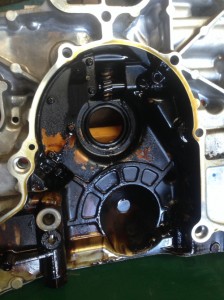 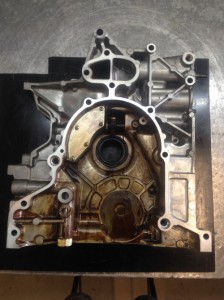 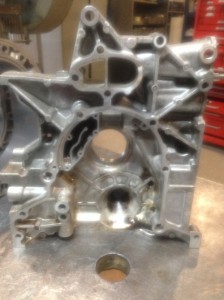 A good oil will not only be a good lubricant for a long period, but also maintain a clean environment inside of the engine to ensure no jamming & reducing wear of moving parts.

Scotts engine had completed only 83,019kms.  When disassembled, I found severe oil sludge and varnish deposits and staining everywhere inside the engine.  This is not un-common amongst engines having spent their lives on very average quality non-synthetic engine oil.

Tony’s front cover, pictured on the right, looks significantly different as he has used Amsoil for 3 years.  Note there is no thick covering of sludge and varnish like Scott’s front cover.  There has been a significant improvement using Amsoil.

The Rx8 timing cover shown right has been acid dipped to remove all impurities.  This is the ‘like new’ starting point used with every Mildren rebuilt engine.  I am confident that Amsoil does not deposit sludge and varnish inside the engine.  On the contrary, Amsoil will hold contaminants and particles in the oil until it passes through the engine oil filter, ensuring maximum removal of wear producing particles and contamination.

My experience and observations lead me to conclude; 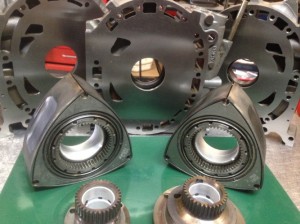 Accept the advice and recommendation of an experienced engine building over an oil salesman or your mate down at the pub.
Make Enquiry